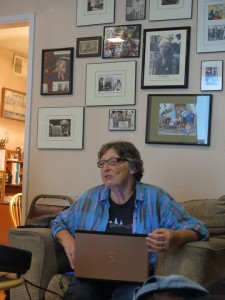 Cathy presents on her trip to Japan at the November 2015 NWTRCC gathering.

My first run-in with the IRS was a direct result of refusing the federal excise tax on telephone service, which was increased by President Lyndon Johnson to help pay for the war in Vietnam. Although LBJ said we could have guns and butter too, we would have to pay for both. My husband and I were University of Illinois graduate students, living on next to nothing anyway but both determined our tax dollars should fight a different kind of war – the “war on poverty” Johnson had promised to wage. As conscientious objectors, we were part of a growing movement to resist the war through refusal to fight for it and refusal to pay for it.

The “revenue man” who knocked on our apartment door in 1966 was carrying an IRS demand letter for $110.30. We had been getting these letters for months. We even had one delivered that day, just before his appearance! To his dismay, we offered to pay that one – a demand for just $12.04. That poor guy left in a big, red-faced hurry and never returned. The letters stopped coming also.

The war ended, and even the draft ended, but President Carter deployed the MX Missile in a very hot “cold war,” and made registration for the draft a requirement for all men turning 18. In 1980, the Reagan administration began a huge military build-up. I was glad the government was not requiring me to register for the draft, but since it was demanding that my nephews register, I wanted to honor their resistance by resisting war taxes.

In the late 1980s I received a summons ordering me to appear at a local Kingston, New York, IRS office with all my records and statements of assets. On the good advice of NWTRCC counsel, I did appear as summoned but declined under the protection of the Fifth Amendment to produce personal records. Although the stunned revenue man threatened to take me to court, he never followed through.

Thirty years have passed and I still withhold part or all of my federal income tax and redirect it to an alternative fund for resisted war taxes. Although I file every year, my enclosed letter explains why I do not enclose a check. I have used “W-4 Resistance” to take control of my salary: the more allowances declared on the W-4, the less tax withheld from the paycheck.

Over the years, I have accumulated several liens and had my salary levied three times. I have never been to court. The year I sent my taxes to my Congressional representatives, those efforts confused everyone for a while. The years I wrote on my tax form that I had a “peace deduction” eventually resulted in a “frivolous penalty” of $5,000. One year I tried to deliver some of the payment to the IRS office in the form of groceries for the homeless.

I’ve also had other interesting encounters with IRS agents. In the mid-1980s, a “revenue woman” bicycled up to my door. She said she was only temporarily working for the IRS in order to pay off her college loans, so I invited her in for a cup of coffee. Over the kitchen table, I explained to her that according to my invaluable War Resisters League Guide to War Tax Resistance, she could not legally levy my entire salary. Amazed, she asked me to give her the Guide so she could read more. When I declined, she rode away on her mountain bike, never to return.

Over the years, changes in the economy made it difficult to stay in one job for very long. The IRS moves slowly. It took an average of five years for the IRS to begin to levy my salary each time I changed jobs. With the first levy in the 80s, I stayed put at my job and got help from a Penalty Fund in Indiana for the amount of interest and penalties collected. I loaned myself funds from an Alternative Fund to keep going. It was 20 years until the next levy. This time, the IRS did not permit my employer – a public school district – to pay my family health insurance premium first before calculating the levy. I quit and found other work.

Ten years passed, and the levies returned. Fortunately my full time hours had already been cut to 15 hours per week for budget reasons, and the levy was quite small. When I was finally laid off, the levy took all my vacation pay and my small pension payout. A series of monthly levies emptied my credit union account. The latest is a 55% levy on the social security benefits I just applied for – an amount far more than the automatic 15% levy. It seems I have a local agent now, who, unless he is sequestered, plans on keeping my name on his forehead! Thanks to NWTRCC counseling, I have an excellent working plan to challenge this.

To many family and friends, a refusal to cooperate fully with the IRS is but a futile and ineffective “tilt at the windmills.” I disagree. If my story inspires even one other person to action, I feel I have already been effective.

Congressman John Lewis spoke out recently against the Supreme Court’s terrible attack on the 1965 Voting Rights Act. To think that it took 100 years after the Civil War to pass that act and to contemplate the future without its protections is devastating. But Lewis, former freedom rider and President of the Student Nonviolent Coordinating Committee, urged us never to give up. He said we each have a responsibility to “find a way to get in the way” of war and injustice. Singer/songwriter Dave Lippman put it yet another way: “put a stick in the gears.” In truth, we owe it to ourselves.

Cathy Deppe lives in Los Angeles, California, where she is a member of Southern California War Tax Resistance.