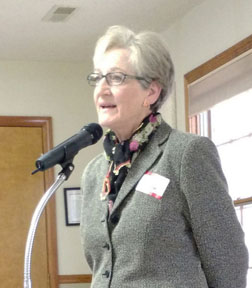 This is the text of Beth’s presentation at the November 2011 WTR gathering in Kansas City. You can watch it on YouTube.

In 1970, two years out of college, as a recent arrival to Kansas City, and in the midst of the Vietnam War, I became a war tax resister. Why?

Because when I told a friend I didn’t feel right about paying the IRS that year because of our country’s involvement in the Vietnam War, he said, “Then don’t! Haven’t you ever heard of Dorothy Day and the Catholic Worker? They don’t pay taxes.”

This was astounding news to me, and I was ready for it. I had two older brothers serving in the Air Force in the war, but I had been more influenced by Martin Luther King Jr. and his example of nonviolent resistance. I was seeing many young men my age struggling with their consciences over what to do about the draft. We women didn’t have that decision to face, but I felt paying taxes showed support and actually did give money to help carry on the war. The war resisters’ tax pie chart in that period showed 69% of discretionary spending going to pay for past present or future war expenditures. 69%! I only owed $18 and change for my 1969 taxes, but I sent a letter to IRS with my tax return and no check.

Several years later, the IRS tried to garnish my wages for that $18. I told my supervisor I would work for free until such time as the garnishment was lifted. The church board had to approve that decision, and they did. My supervisor used the money saved from my salary refusal to help some parents who had lost their jobs pay for their children’s childcare fees.

The garnishment was actually lifted several months later and I didn’t know why. It turned out that the IRS had found an old bank account my parents had for me in Nebraska. The bank had let my parents know the IRS was trying to collect it, and my parents paid it and didn’t tell me till three months later.

I wasn’t a very mature or well-informed war tax resister, so after the war in Vietnam ended I thought maybe the war tax resistance campaign would be over, and I called to ask Angie O’Gorman. Angie, with her husband Bob Calvert, had moved the national office of War Tax Resistance to Kansas City in the 1970s.

She straightened me out in a hurry! “Do you want to pay for nuclear weapons?” she said, and then mentioned a few other obviously morally objectionable U.S. military interventions. And so it happened that what began for me as a protest against one war became a way of life. I was a single parent by then, so I chose to keep my income below the taxable level so I wouldn’t risk imprisonment for refusing to pay taxes. [Ed’s note: Jail is a common fear but remains highly unlikely for war tax resisters.]

It was a challenge to raise a son as a single parent on such a modest income, but sharing housing with friends helped us get through, and my parents’ made a gift to me of their old car. As a young teenager my son started to complain about our simple lifestyle. I remember the day he said, “Mom, you probably wouldn’t even owe more than a couple hundred dollars—that wouldn’t even buy one gun!” I just reminded him that he had everything he really needed, though maybe not all he wanted, and that when he grew up he would have to make the choice for himself about what to do with his money and the issue of war.

It was hard to be confronted by friends and family who thought I was wrong not to pay taxes. They felt good about the good things their taxes were supporting — education, roads, social services — and felt I wasn’t paying my share, but enjoying the benefits of what they were paying for. I did and do still feel an obligation to better my community and the world, but I have found a different way to contribute. By requiring my employers to keep my wages below the taxable level, I have helped in the development of the Kansas City Interfaith Peace Alliance, Episcopal Social Services, Catholic Charities Refugee Services, English as a Second Language program, and Literacy Kansas City, enabling each organization to offer a service previously unaffordable. I’ve also been able to give shelter now and then for folks in need.

I’m very grateful to have found in the Kansas City area like-minded people who strengthen my resolve and inform my conscience. But we can’t let ourselves be content with our tax refusal alone. The lives of billions of people depend on our resistance to the mighty military machine and the unjust policies of our government. Millions have already died at the hands of our military and its proxies. Millions, maybe billions more, have died for lack of food, shelter and medical care because of resources given to military priorities rather than human needs. And the entire planet is at risk if we cannot control the demonic nuclear weapons being created in our own backyard in Kansas City.

In one way I’m glad this new nuclear weapons plant is being built here, because here there are people who will not be quiet about the killing machine it is going to construct. We will not accept that its existence is inevitable. We will not believe that this is the best way to bring jobs to our community. And we will not give our consent to the insanity of nuclear deterrence and nuclear suicide.