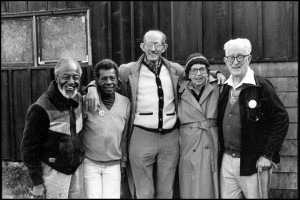 Wally Nelson died on May 23, 2002. He died in much the same way he lived his life: without fear, and surrounded by people who loved him.

Wally was born in 1909 near Little Rock Arkansas, son of Duncan and Lydia Nelson. He was the second youngest of sixteen children. His father was a Methodist minister, and the family spent a few years sharecropping.

Wally grew up in segregated Jim Crow society, where the elders were former slaves. He learned firsthand the smell and taste of oppression, and the roles of master and slave. Through values he largely attributed to his father’s teachings, he grew to liberate himself from these roles.

In the 1920s and 30s, Wally’s first experiences with activism came through Christian Youth groups. While he did not consider himself a Christian after this period, it was during this time that he embraced pacifism and developed his organizing skills.

In 1942, Wally entered a civilian public service camp (CPSC) for conscientious objectors to military service, along with other anti-war activists of his generation. After a year at the CPS camp, he rebelled against the complicity of this “service to the war makers.” Describing his CPSC experience as akin to slavery, he walked out of the camp. This led to a 33 month prison incarceration which concluded with an 88 day fast. While in prison during WWII, Wally met Juanita Morrow, then a reporter for a Cleveland newspaper. A couple of years after his release from prison they formed a life-long partnership. These two lovers and comrades formed an inspiring duo for the remainder of the century. Their differing strengths and weaknesses interlocked into a sum that surpassed each impressive individual.

Wally was active in helping to shape the nonviolent philosophy and activism of the postwar civil rights movement. He partook in freedom rides to integrate buses in the South in 1947. He was the first paid field organizer for the Congress of Racial Equality (CORE). In the early fifties he directed workshops on nonviolent direct action that led to desegregation of public places in Washington D.C.

Wally and Juanita became war tax resisters in 1948 after attending the founding conference of the group “Peacemakers.” This group of war resisters made the connection between the permanent war economy being created and the expansive income tax system that was being established to support it. Over the next 54 years, Wally steadfastly refused to “pay for killing people.” He took a position of complete non-cooperation and was most proud of an admission once made by a Philadelphia IRSagent: “We’ll never get that Nelson fella to pay a dime.”

Wally’s lifework of activism was augmented by many jobs including carpentry, shoe shining, youth activities director, egg salesman and bookplate salesman. In 1970, after overcoming Wally’s hesitation resulting from his childhood sharecropping experiences, Juanita convinced Wally to return to the right livelihood of farming. For the last third of his life, first in New Mexico and then in Western Massachusetts, Wally and Juanita lived simply on the land, without modern utilities, raising most of their own food and selling produce for their small cash needs.

Wally believed deeply in nonviolence. In 1980 he wrote a short statement that is classic Wally:

“Nonviolence is the constant awareness of the dignity and humanity of oneself and others; it seeks truth and justice; it renounces violence both in method and in attitude; it is a courageous acceptance of active love and goodwill as the instrument with which to overcome evil and transform both oneself and others. It is the willingness to undergo suffering rather than inflict it. It excludes retaliation and flight.”

Wally possessed two prominent if very different attributes that created the nonviolent activist he was. He loved people, he was incredibly accessible to everyone and seemed to treat everyone as his equal. He embraced being alive. He relished talking, dancing, sex and ice cream.

Wally was also the most un-intimidatable person I ever knew. Many times in his long life he held fast in the face of verbal and physical attack without retaliation or flight. Juanita describes Wally as being “a stubborn man who just does what he believes rather than being introspective about it.” For Wally Nelson, the distance between the recognition of the right thing to do and acting on it was very short.

“We don’t intend to cooperate with the IRS in its attempts to make us pay for killing. What would you do if I came into your office tomorrow with a cup in my hand, asking for contributions to enable me to buy guns and kill a group of people I don’t like?”

If I hadn’t met Wally Nelson, I would never have come to believe that nonviolence and war tax resistance were more than impractical fantasies. Wally made these intellectual ideas practical by living them every day.

By striving to live a simple, low consumption lifestyle, and by treating the many people with whom he came into contact with dignity, respect and love, Wally sought to live his every day personal life in a revolutionary way. By also directly confronting the powers that perpetuate violence and oppression through nonviolent direct action, be it the war machine or racism, Wally related to the injustices of the world in a revolutionary manner. He integrated the personal and the political into an activist lifestyle that was a model for many, many people. This was Wally’s greatest gift, something that has been passed on and shared, something that cannot die.

From the August/September 2002 issue of More Than a Paycheck.