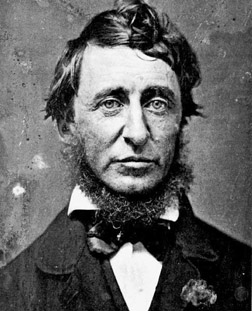 By July 1846, the naturalist, slavery abolitionist, and writer Henry David Thoreau had been resisting the payment of poll taxes that helped fund the Mexican-American War for six years. He was arrested for refusing to pay and spent a night in jail. Though someone, likely his aunt, paid his back taxes and got him out the next day, his brief time in jail had a profound influence on him. A few years later Thoreau published the essay Civil Disobedience, containing his famous line, “If a thousand men were not to pay their tax-bills this year, that would not be a violent and bloody measure, as it would be to pay them, and enable the State to commit violence and shed innocent blood.”

Also in that essay, he wrote, “Prac­ti­cally speak­ing, the op­pon­ents to a re­form in Mas­sa­chu­setts [to abolish slavery] are not a hun­dred thou­sand pol­i­ti­cians at the South, but a hun­dred thou­sand mer­chants and farm­ers here, who are more in­ter­ested in com­merce and ag­ri­cul­ture than they are in hu­man­ity, and are not pre­pared to do jus­tice to the slave and to Mex­ico, cost what it may. I quar­rel not with far-off foes, but with those who, near at home, co-op­er­ate with, and do the bid­ding of those far away, and with­out whom the lat­ter would be harm­less.” As war tax resisters, we refuse to “do the bidding of those far away” who want to spend our taxes on endless war. Despite our distance from the conflicts the US government funds, we still recognize how taxation compels our participation in war, and how refusing to pay brings attention to this reality.

Throughout the month of July, the National War Tax Resistance Coordinating Committee is celebrating the contributions of Thoreau to our modern movement. Join us by: